As powerful as this is, this isn't the only draconic god in the pantheon. For other dragons to put fear into the hearts of the gods, see:

This version of Tiamat varies a bit from the version printed in my copy of the Draconomicon (and I don't even own Deities and Demigods). At the most basic level, the changes include being a Greater Deity instead of a Lesser one, and being Chaotic Evil instead of Lawful Evil.

This build uses NONE of the rules included in Deities and Demigods. Even the Divine Rank rules used here come from a different source, that source being the Immortal's Handbook, where Tiamat is specifically described as being a Great, Great, Great Wyrm Polychromatic Dragon... which is what I'm presenting to you here. The history is gleaned from the suggested adventured given in the IH.

For those of you upset that this changes the alignment of Tiamat, I offer this to you: Tiamat, as statted here, has a sufficient Bluff skill score that she could pretend to be Neutral Good if she so chose and it would even fool alignment detection magic. For those of you upset that the changes make Tiamat too powerful, note that Greater Deity is FAR from the top rank of godhood in the Immortal's Handbook system, and I agree that the gods should fear dragons just as much as mortals do. Well, gods should fear dragon gods, at least. 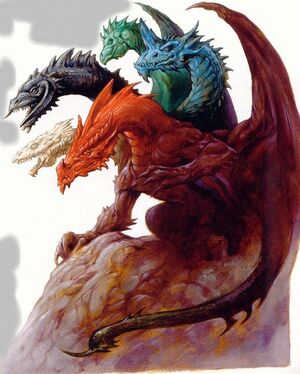 This page could use some tidying up. We try and maintain a consistent design in this wiki, so visiting users and people searching can learn to know where to look for data. You can help this wiki by cleaning up this page (Using old spell structure; switch to 'magic' variable with SpellsPrepared template or MagicKnown template). Once the article is cleaned up, the {{tidy}} tag can be removed from the article. NPCs with this tag can be found at this link

The precise history of any god is difficult to determine, and the history of a dragon god doubly so. Never-the-less, certain details are known of Tiamat's history, as described below.

While Tiamat's exact age is unknown, it is clear that her age falls somewhere between 2 and 4 million years. Daughter to Io, she hatched from an egg, and did not spontaneously generate as some gods claim to have done. She was not spawned in response to belief from dragons, but instead exists independently of belief, obtaining the bulk of her power not from worship, but from the slow process of siphoning cosmic power from the universe itself.

Her earliest history is unknown, however, while she was still young, somewhere in the vicinity of a mere 10,000 years old, she encountered and mated with an Elder God named Apsu, presumably falling in love with the dreaded being, who would later be bound within an interdimensional prison. Over the course of a few centuries before Apsu was bound, she laid several clutches of eggs which would be the first chromatic dragons of each of the five colors.

Over the eons, Tiamat has had many mates, and spawned not only many dragons, but also several abominations. Though all this, however, she still pines after her first husband, and one day dreams to free him from his prison again. She suspects her brother Bahamut, the Platinum Dragon, of being at least partially behind the fall of Apsu, and fights him and his progeny at every turn. Her rage and lust for vengence has caused her to turn all of her children towards thwarting the metallic dragons wherever they go, corrupting every good they seek to perform, and spreading evil far and wide in search for some power that might one day free Apsu.

Unless wholly assured of victory, Tiamat prefers to attack through underlings, spells and as a last resort melee, in that order. When facing multiple foes Tiamat concentrates on the weaker opponents, first seeking to dominate, then, if that fails, destroying them.

Tiamat's natural weapons, as well as any weapons she wields are treated as chaotic-aligned, epic and evil-aligned for the purpose of overcoming damage reduction.

Abnormality (Extra Heads) (Ex): Tiamat has five heads instead of just one as is normal for her species. Each of her heads can act separately in every round, either biting, using a breath weapon, or casting a spell. In this manner, Tiamat can cast five normal spells per round, plus five quickened spells. Note that her Automatic Metamagic Capacity grants 14 free levels of metamagic that can be used per round. All 14 levels can go into one spell, or it can be split amongst many spells.

Alter Self (Su): As a free action, Tiamat can change the color of her scales and the shape of her body to mimic the appropriate evil dragon type. However, her disguise is not perfect as she still retains her tail barb. Tiamat can also use this ability to hide her extra heads, although doing so denies her the benefits of having them for the duration.

Breath Weapon (Su): Each of Tiamat's heads can mimic the breath weapons of any chromatic dragon, though the damage dealt is always 98d20 with a reflex save (DC 94 = 10 + 1/2 DRAGONS HD + CON MOD + DIVINE BONUS) for half damage on a sucessful save. The size is always either a line of 320 feet, or a cone of 160 feet. Half of this damage is divine energy and the other half either acid, cold, electricity or fire. Once used, Tiamat may not use that head to breathe her breath weapon again for 1d3 rounds. A head that uses its breath weapon cannot cast a spell that round, nor can it bite.

Tail Sting (Ex): Instead of a tail slap, Tiamat dragon can deliver a poisontail sting. Creatures hit by this attack take 3d6 (primary and secondary) Constitution damage unless they make their Fortitude saves (DC 78).

Terrifying Presence (Ex): Tiamat's frightful presence extends to 2040 feet. All creatures failing their will saves (DC 100) become panicked for 8d6 rounds, those who successfully save are still treated as shaken, unless wholly immune to fear.

Tiamat's Hoard is, quite frankly, stunning. This is the hoard to end all hoards. The ultimate in the collection of gold, jewelry, fine art, and above all, mountains of gold. The hoard is located on a demi-plane of Tiamat's creation, and designed such that it loops around on itself. The hoard as it is is larger than any other hoard in existance; but this looping creates a hall-of-mirrors effect, making the hoard appear litterally infinite. Since the demi-plane loops in ALL directions, it appears to travelers that they are inside a maze of tunnels created out of nothing but treasure. The laws of physics of this demi-plane prevents the treasure from collecting in just one single sphere, as one might expect it to in more rational worlds.

Tiamat knows every single peice of treasure in her hoard in excruciating detail. In fact, she knows the "true name" of every peice of treasure in her hoard, and can utilize spells to find it again. As such, every peice of treasure in the hoard is considered to be cursed, with the curse of "Tiamat will hunt you down". Sometime, when she is feeling merciful (rarely if ever) or particularly greedy (as a general rule) she will allow thieves to ascend to their proper afterlife after she kills them if they first repay her a thousand times what they first stole from her in the first place. If they fail to do so, she will utilize "Trap the Soul" to imprison the pesky thief in a place of torment of her devising for all the rest of time.

Total Number of Coins: 551,052,496,404,810
Weighing roughly 11 trillion pounds, or 5.5 million tons
Outside of Tiamat's demiplane, the coins would form a sphere rougly one hundred meters in diameter.

Few dragons above a rather small size are able to actually build a bed of coins to sleep on. Tiamat, on the other hand, has exactly that luxury.

Like many chromatic dragons, Tiamat collects vast quantities of copper coins in order to "bulk out" the size of her hoard; in fact, the chromatic dragons first learned the trick from their mother. These copper coins are at the very bottom (center?) of the mountains (walls?) of treasure, completely hidden by the covering of more valuable coins.

These coins have been collected over Tiamat's lifetime from innumerable different prime material planes from tribute, ransom, and sheer theft/murder. Many of these coins are truly ancient, and would be valuable as "works of art" to the right collector.

Of course, each coin would have to be appraised and marketed separately, which would take a considerable amount of time, especially since a willing collector would also have to be found. If a bored immortal were to spend several lifetime doing so (or if one was to use a spell for the purpose), the true value of the coins works out to 5,215,814,098,180,179.44 gp. Of course, Tiamat knows the true value of every single one of her coins.

Epic Feats from the Immortal's Handbook[]

The following feats are reprinted from the Immortal's Handbook, which shouldn't be a problem since they're available for free on the author's website anyway.

You can cast spells that exceed the normal limits of spellcasting.

Prerequisties: Ability to cast spells at the normal maximum spell level in at least one spellcasting class, four metamagic feats.
Benefit: When you select this feat you gain one free level of metamagic per round, which you may spontaneously apply to any spell you can cast.

You can stack the same metamagic feat multiple times.

Prerequisties: Four metamagic feats, Spellcraft 24 ranks.
Benefit: You can apply the same metamagic feat any number of times to the same spell, provided you have a spell slot of adequate level or sufficient free levels of metamagic from Automatic Metamagic Capacity

eg. With this feat you could use a 9th-level spell slot to triple empower a fireball spell (for +150% damage).

Normal: Without this feat you can only apply the same metamagic feat once to a single spell.
Special: A spell can only be quickened more than once a round with the free levels of metamagic granted by Automatic Metamagic Capacity. In any given round, you may cast one spell that is not quickened, one spell that is prepared as quickened, and any number of spells quickened spells, each using 4 free levels of metamagic from your Automatic Metamagic Capacity quota for that round.

Multiple quickened spells happen simultaneously, so you cannot teleport to a location, cast a spell and then teleport away again.

In the wake of this feat the following feats become redundant: Improved Heighten Spell; Intensify Spell and Multispell. It is also suggested that you remove the Improved Metamagic feat altogether.