As powerful as this is, this isn't the only draconic god in the pantheon. For other dragons to put fear into the hearts of the gods, see:

Cometary Dragons are described in the Immortal's Handbook as two headed snakes that twist time to their pleasure, traveling between stars over the course of eons, enveloping themselves in mountains of ice made from frozen time itself. It also describes the Ouroboros as a Great-Great-Great Wyrm Cometary Dragon, so that's what we've got here.

This uses NONE of the rules from Deities & Demigods. All divine rules come from the Immortal's Handbook instead. Demiurge is four categories higher than Greater Deity, and is the lowest rank of the Eternals, a classification two higher than merely Immortal. (Mortal, Immortal (Divine), Cosmic (Sidereal/Overgod), Eternal (Lords)). 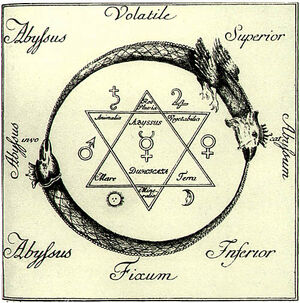 This page could use some tidying up. We try and maintain a consistent design in this wiki, so visiting users and people searching can learn to know where to look for data. You can help this wiki by cleaning up this page (Using old spell structure; switch to 'magic' variable with SpellsPrepared template or MagicKnown template). Once the article is cleaned up, the {{tidy}} tag can be removed from the article. NPCs with this tag can be found at this link

Ouroboros, the Tail Devourerer, the Dragon Lord of Time    CR 272

According to Plato, the Ouroboros was the first living being in the universe, an immortal, perfectly constructed being. This is not entirely accurate.

The Ouroboros is a Demiurge, a part of the universe itself. The Phoenix's legends say that the Ouroboros represents the Milky Way, a band that stretches in a circle around the entire world. But in truth, it isn't just the physical world he surrounds, it's the temporal world as well. Ouroboros exists in at least 5 dimensions, if not more. Ouroboros is considered to BE time itself. Killing him is impossible without destroying all of time itself (which is also impossible). Imprisoning him would freeze all time in the universe he resides in.

For those that encounter Ouroboros, he appears as a massive snake with heads at both ends, and two claws for each head. Perfectly white in color, Oroboros radiates deadly X-Rays, which contribute to the Dragon's Overwhelming Presence.

Divine Rank (Su): Ouroboros has a Divine Rank of 68, qualifying him as a Demiurge. He adds his divine rank as a foresight bonus to armor class; attack rolls; checks (ability checks, caster level checks, skill checks, turning checks); difficulty class (for any special abilities, spell-like abilities, spells); initiative; saving throws and spell resistance. This has already been factored in the stats above.

Cosmic Consciousness: The senses of Ouroboros extend to the borders of the current universe he inhabits, although he cannot see around corners or through opaque objects, specifically blankets.

Breath Weapon (Su): Each of Ouroboros' twin heads can breathe a cone of temporal stasis that freezes all targets who fail a Reflex save (DC 253) for 14 rounds. Targets who successfully save are treated as if slowed for 14 rounds instead. Opponents frozen in this manner can only be attacked by creatures immune to the effects of time, including Ouroboros himself. However, once affected by this breath weapon an, opponent is immune to subsequent temporal breath attacks until the initial effect wears off. Each of Ouroboros' twin heads must wait 1d2 rounds before using the breath weapon again.

Chronal Displacement (Su): The scales of the Ouroboros give off a bioluminescence which acts exactly like a displacement effect. However this seeming radiation is actually the absorption of the local time. Anyone grappling with, or being struck by Ouroboros’s natural weapons suffers an additional amount of chronal cold damage equal to the base damage dice of the attack. Half of ths damage is chronal based, the other half cold based. If Ouroboros scores a critical hit with his natural weaponry this damage is also doubled.

Overwhelming Presence (Ex): Ouroboros’s overwhelming presence effects all within 8960 ft (1.7 miles) whenever he attacks, charges, or merely flies overhead. All creatures failing a will save (DC 282) die of fright, those who successfully save are treated as shaken (but with a -4 morale penalty to rolls) and sickened. Only creatures wholy immune to fear cannot be shaken by this effect, and only creatures immune to radiation cannot be sickened by this effect.

Time Folding (Su): When making a full attack the cometary dragon gains an additional attack for every age category. This is akin to the haste spell, however the effect stacks with itself. This also grants a +1 bonus to attack rolls; armor class (dodge bonus) and Reflex saves per age category.

Transtemporal (Time): Ouroboros can travel freely in time. Beings without the Slipstream ability are granted no actions against Ouroboros, as he attacks them in the past. Beings with the Slipstream ability can act against Ouroboros, however, Ouroboros still gains triple actions against such opponents; simultaneously acting from the immediate past, present and future. Ouroboros acts normally against foes that also posess the Transtemporal ability.

Energy Absorption (Su): Ouroboros is not merely immune to cold, it heals him, just like positive energy heals mortals.

Interdimensional (Ex): Ouroboros exists just as much in the space between dimensions. When targeted with an attack or spell, Ouroboros has a base 50% chance of avoiding the attack. This 50% miss chance is in addition to miss chances granted by any other effect.

Seventh Sense (Ex): Ouroboros can replay 68 rounds per day. When he replays a round, everyone else uses the same actions, whereas he can change his actions based on the knowledge of what they are going to do. He can only replay a given round once before the time stream becomes too muddied and confused. The Slipstream does not defend against this ability. Other beings with Seventh Sense can replay their actions (within normal initiative order) along with Ouroboros if they choose to use one of their uses per day.

Slipstream (Ex): Ouroboros is immune to time-based effects and cannot be undermined by time travelling opponents. Ouroboros is always able to act during Time Stop spells, even if he was not the originator of the spell.

Transmortality (Entropy): Ouroboros is truely immortal and cannot be permanently destroyed, even by beings of a higher divine status. If brought to the point of death, Ouroboros is reborn 1d10 hours later. During this time, he is vulnerable to imprisonment.